Looking back at Breathing Space Day 2012

This year the event carried the theme 'Well Wednesday', where Scots were urged to set aside their worries and take some time out to look after their mental wellbeing.

Breathing Space Day was promoted with a touring van displaying Well Wednesday messaging, which visited venues across the central belt to raise awareness of the Breathing Space service. Public Health Minister Michael Matheson said: "Looking after our mental health and wellbeing is crucial. Time out on the hills climbing or going for a run are usually my Breathing Space. The Breathing Space telephone advice line provides a valuable listening ear and signposting service for people experiencing low mood, depression or anxiety. The annual awareness day is an opportunity to raise awareness of the advice line and the importance of our work to improve mental health and wellbeing in Scotland." 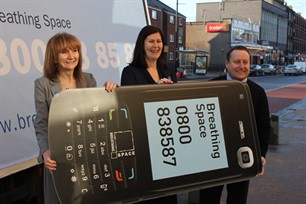 At the launch of 'Well Connected'

Glasgow City Council's Executive Member for Social Care Matt Kerr said: "There is still a considerable stigma attached to mental health issues and so it is no surprise that people continue to find mental health something that is difficult to discuss. But it is clear that reaching out to speak to someone can make a huge difference to those who are affected. Breathing Space is a vital support service that gives people the chance to voice their concerns in complete confidence and hopefully begin to take the first steps towards recovery." 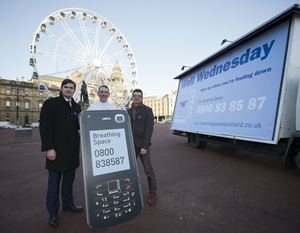 Tony McLaren, Breathing Space National Coordinator was interviewed on BBC Scotland's Call Kaye show, where listeners were encouraged to text in how they get their 'breathing space'. Speaking about the importance of everyone taking time out to get their own breathing space, presenter Kaye Adams said: "I would say swimming is my little release. I don't do it often enough but find I can get in the pool with my thoughts all jumbled in my head and slowly they quieten down and become more ordered." 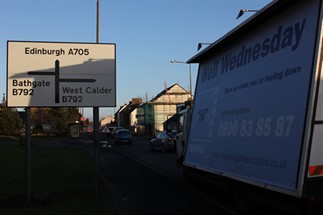 On the road to Edinburgh

Motherwell FC Manager Stuart McCall added his support to Well Wednesday: "We have formed a strong partnership with Breathing Space and this an excellent opportunity for us as a club to raise awareness about looking after your mental as well as your physical wellbeing. We try hard to help get health messages across to our fans as we are very much a community club. Hopefully we as ‘the Well’ can help to raise awareness on Well Wednesday." 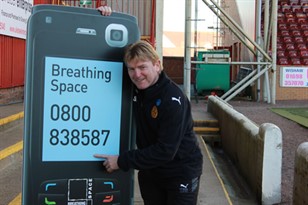