A Glasgow-based running community, which supports those recovering from alcohol and substance misuse, has launched a series of free running events.

Formed in 2012, Recovery Runners is now a thriving community which meets to train, run and promote the benefits of running on physical and mental health.

Following the success of their inaugural 10K last August, the group hosted a Recovery 3K Race on 19th March at Hogganfield Park in Robroyston.

Under starters orders and raring to go at the start line 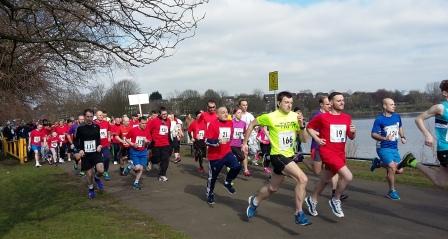 Over 200 runners took part in the event at Hogganfield Park

Further events are due to take place in June (a 5K at Springburn Park) and September (a 10K at Glasgow Green).

John Milligan, a Senior Addiction Worker for the South Glasgow Community Addiction Team and organiser of the event said:

"At Recovery Runners we strongly believe that running and exercise in general helps all involved to achieve better outcomes.  We also believe that the benefits are felt by not only the participant but their wider family and community.  We have planned a series of events in order to allow the widest possible level of participation and these races are supported by our regular training sessions across a number of city venues”

Everyone who takes part in all 3 races will receive a commemorative race T-shirt to mark their achievement. 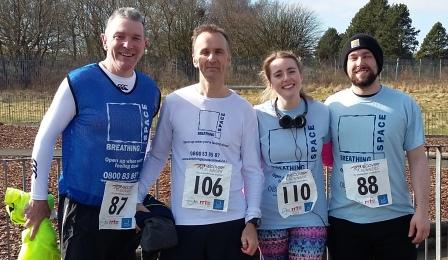 Team Breathing Space getting ready before the race 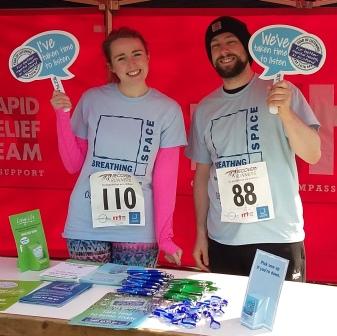 "This is a great initiative which helps people in recovery and also those in the wider community to introduce more physical exercise into their life. For many it will be the first time that they have taken part in a run. Being able to go on this journey and complete a 3K, 5K and then 10K, will be a great achievement and will bring real benefits to their physical and mental health."

“I was very impressed to hear about this initiative, which not only promotes recovery from alcohol and substance misuse but also gets people involved in physical activity. The benefits of physical activity are remarkable, and it’s truly inspirational to see the difference it can make to people’s lives. I’d like to send my best wishes to everyone who is taking part in these three races.”

For more info or where to find your local group contact John Milligan at john.milligan@glasgow.gov.uk