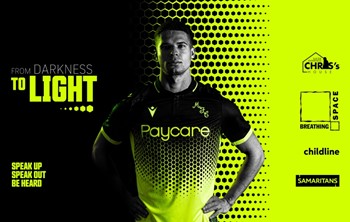 Breathing Space are proud to feature on the new third kit from Motherwell FC. The kits will continue the fight against suicide as well as the positive mental health message.

Motherwell FC have teamed up with the Samaritans, Breathing Space, Childline and local charity Chris’s House to launch the Darkness To Light luminous third kit, that will encourage fans who are struggling to speak up, speak out and be heard.

Any and all profits made by Motherwell FC on the new kits will be split equally between the four organisations, who provide a vital first point of contact for those who are needing to talk or are feeling suicidal.