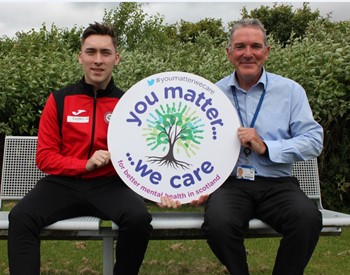 Lisa-Jane Dock, Breathing Space National Development Officer, said: “We are delighted to be continuing our partnership with Newmains United FC.

“The club has shown a real desire to improve mental wellbeing both at the club and in the wider community.

“We are committed to working together to raise awareness of the support Breathing Space and other organisations can provide.”

Breathing Space national co-ordinator Tony McLaren gave a talk to the players towards the end of last season.

United winger Cammy Browning said: “I think the talk from Breathing Space struck a chord with everyone.

“It’s great that organisations like this exist at a time when they’re desperately needed.

“Their approach to helping people will hopefully see an increase in people using the service and trying to tackle their struggles head on rather than keeping them behind closed doors.

“Hopefully this linkup can play a small part in helping someone in need, whether directly or indirectly.”

United chairman Stuart MacKenzie added: “Breathing Space do a lot of excellent work around a subject that is very important to us at the club.

“We look forward to working together to further highlight the issues, which will hopefully have a positive impact on the wider community.”

Find out more about the club at newmainsunitedfc.com or on twitter @NewmainsUtdFC